NOAH'S ARK TIMBERS - IDEAL FOR HOUSING
I do not believe the ark is there to be discovered.
​It would have been salvaged long ago.

THE SEARCH FOR NOAH'S ARK
THE MOST IMPORTANT VESSEL EVER BUILT

Noah's Ark would be 'THE' Shipwreck to find. The find of this vessel would have to be the pinnacle of any Treasure Hunter's career. Nothing could ever top it!
Historically, there has never been and never will be another vessel like the one in question. A one of a kind, purpose built sea going craft.
This is not just any old shipwreck, Noah's Ark is the 'ultimate' shipwreck.
But remember the ark was on dry land and not underwater. Perhaps they used it as an apartment block for awhile but as the family of Noah grew in number, they would need building materials. Why would they walk away from perfectly good building materials to search for more?

SEARCHING FOR THE ARK A WASTE OF RESOURCES

Why waste time and resources searching for the ark!
I suggest the timbers of the ark would have been recycled for housing, but I add Noah and his family wouldn’t have been in a hurry. The ark (assuming it sat upright) was suitable for human habitation and large enough (without the animals) to accommodate Noah’s growing family for a long time.
Then later perhaps it was, as I suggested, stripped to make smaller buildings.

​As for anchors found on the mountains- Perhaps they were storm anchors called drogue stones. They hung from below the boat on ropes (beyond my technical understanding, but to do with maintaining stability). They are marked with crosses and other emblems including the emblem of the great-grandson of Noah, Nimrod, who was not on the ark.
Perhaps these stone ‘anchors’ were shaped and marked by the descendants of Noah, years later. They may have been monuments to the flood event, rather than actual artifacts from the ark used as anchor stones which are not mentioned in the Genesis account of the flood. (There was nowhere to anchor the ark so no need to have anchors.
The crosses on the stones are not necessarily Christian emblems (The earths population was at the time 100% Jewish. There were no Christians until there were followers of Christ over 2000 years later. The cross used for crucifixions was introduced by the Romans & Christ died about 2300 years after the global flood.

https://www.icr.org/article/genesis-chinese-pictographs/
The pictures that were chosen and their meanings, are what give us an amazing insight into both Chinese and global history. The clues to our mysterious past have remained hidden in plain view to us all for thousands of years.

DON’T JUMP TO CONCLUSIONS!
This is not an inaccurate image of Noah’s Ark.

Boat and sick animals. Photo artinasia.com
​A lot of questions about China's environmental conditions were raised when 16,000 dead pigs floated down a Shanghai river. The ghastly event inspired an unusual contemporary art exhibit.
The full-size fishing boat with a barnacle-encrusted hull is draped over with sick looking animals: tigers, pandas, leopards, and an elephant, which were all made for the artist in a factory from polystyrene and wool.
This provocative and unsettling solo show, is the work of Chinese artist, Cai Guo-Qiang, who was inspired by a 19th-century Russian painting called The Ninth Wave, which shows survivors of a shipwreck clinging to wreckage as waves crash in the background.
One visitor to the exhibit, a  Shanghai art teacher,  said
"When we run into difficult situations, we all become very helpless."

THE ARK HAS NOT BEEN DISCOVERED
​Natural rock features are not the ark!

Supposed metal-braced walls are natural concentrations of limonite and magnetite in steeply inclined sedimentary layers in the limbs of a doubly plunging syncline. Supposed fossilized gopherwood bark is crinkled metamorphosed peridotite. Fossiliferous limestone, interpreted as cross cutting the syncline, preclude the structure from being Noah's Ark because these supposed "Flood" deposits are younger than the "Ark." Anchor stones at Kazan (Arzap) are derived from local andesite and not from Mesopotamia.

I could probably write heaps on the global flood of Noah’s day. But thanks to my friends at CMI Creation Ministries International, I don’t need to. They have already gone the extra mile to provide us with an excellent resource.
​ Just click on the button below:
Noah's Ark Q&A

Einstein once said (or so they say he said):
“Everything should be made as simple as possible’’
I reckon my parents did a good job - I see myself as a simple man. I was a hopeless school student. A lot of what I know I have learned from personal observation and hands on experience. Apart from the written word in scripture, book learning is not for me. However I do recommend a book written by a man with a surprisingly similar surname to my own:
John Woodmorappe – ‘Noahs Ark: A Feasibility Study’
This book on Noah's Ark is a one-of-a-kind compendium of information about animal-care methods, food-preservation techniques, animal-handling techniques, etc. It discusses in great detail how 8 people could have cared for 16,000 animals using pre-scientific technology. Whether or not the reader believes in the Bible or not, he or she can be fully confident that my book conveys substantive information about the workability of Noah's Ark and its Inhabitants.

OBSERVATIONS ​OF A SIMPLE MAN THE GLOBAL FLOOD

While prospecting for rubies in Western Australia, before I knew anything of ancient scripture, I observed what to my untrained eye and simple uneducated mind, seemed to be signs of a massive flood. Not just some local flood where the rivers rose and burst their banks. No! What I saw, was far bigger than that. Some would say “evidence for a flood of biblical proportions”

Ruby in Kaolin matrix
Typical of many other areas in the world where rubies are found (Vietnam, Sri Lanka and others) the land I prospected was comprised mainly of white clay (Kaolin) also known as China clay.

Granite with Feldspar, Quartz & Mica
Kaolin clay is formed from the weathering & breakdown of a rock called Feldspar. Feldspar is one of the main components of common granite rock. It is the milky white grains or angular little blocks (crystals) that one sees alongside the other two main minerals in granite; flakes of mica and glassy quartz grains.
Most of my prospecting was conducted alone so without the input of ‘educated’ (book learned) people, I was able to observe every aspect of my surroundings, gather my ideas and formulate my own theories. I would go through a series of questions & search for answers.
“What phenomenal force could separate the grains in granite & pulverise feldspar into a powder and turn it into fine white clay?
And, what about the high levels of salt in the clay? Where did that come from?
From a high point on my prospecting area, the landscape I saw was thousands of acres of rolling hills and dales made up of separate piles of granite components. Quartz grains as sand in the valleys, feldspar as the clay hills and tiny flakes of mica that could be seen glistening everywhere. There are other minerals too, such as the Iron that gives the rock outcrops their rusty colour and the microscopic elements such as minute quantities of gold and quite likely rare earth elements such as platinum.
My main interest was an aluminium rich rock, corundum. Rubies are a pink or red gem variety of corundum (But that’s another story here on oztreasure)

If this blasted, shattered material was mixed with water to make mud slurry, then tumbled violently for some time at high speed, poured onto the ground & dried, I wonder what I would be left with?
I never have tried this experiment, but my guess is that it would result in a miniaturized model of the landscape in my prospecting area. With mineral grains separating into their own kind, shape, size & weight.
I believe we can still see evidence of the land drying up, with the last of the flood waters running off the land and back into the sea. This natural action has been fast tract by man’s poor stewardship of God’s creation and excessive clearing of land & resultant erosion.

MARINE FOSSILS ON TOP OF MOUNTAINS

Marine Fossils
How could there be marine fossils on top of the highest mountains?
If you doubt all the land was covered by the sea, then consider the fact that fossil-bearing marine lime stones form the summit pyramid of Mount Everest. Marine fossils are found throughout the geologic column in places like the Grand Canyon
I hasten to add, marine fossils on Everest is not proof that the water was 8848m deep. It is only evidence that what has now been pushed up that high was at one time below sea level.

UPSIDE DOWN & DOWNSIDE UP 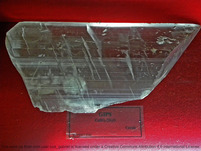 Gypsum Crystal
Consider this also - Gypsum is a mineral formed through evaporation. On North Rankin Gas platform I saw chunks of gypsum brought up by our drill rig from hundreds of feet below the surface.
This shows how much our planet has been warped & distorted, what was down is now up and what was up is now down.

Have you ever seen the wrinkles in a dehydrated apple?
​It is just like the surface of our dehydrated Earth, with highs and lows, valleys & hills.

​Even modern volcanoes spew out water from great depths.
​About 70% of material erupting from a volcano is water vapour.

Astonishing new theories explain the flood that may have inundated the world in ancient times. 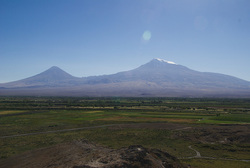 Mountains of Ararat
The Bible speaks of the ark coming to rest on The Mountains of Ararat, not necessarily Mount Ararat itself.
If I was looking for a wooden vessel that was left stranded, by a massive flood, on a mountain top, I would expect to find other things also. If a piece of timber is found on the mountain it should be of no surprise it could be explained as left there by the flood just like the ark that people look for,  but it is just a piece of timber that could have been deposited there along with all manner of things that settled there.

$1 MILLION REWARD FOR A SHIPWRECK!
A few years ago a reward was offered for  discovery of Noah's Ark.

Noah's Ark Alliance Policies and Procedures
The Reward The Noah's Ark Alliance, hereinafter referred to as the NAA, will give a reward of $1 million (U.S.) to any person or group who finds the ancient, biblical Noah's ark and confirms its present existence by offering incontrovertible, scientific proof to the NAA before December 31, 2000.
Noah's Ark Alliance 3235 Satellite Blvd., Suite 555 Duluth, Georgia, 30096 USA