Email​ Rex Woodmore:   art@mail-me.com
​Born in Scotland in 1645, William Kidd started out as a privateer, hired by European royals to attack foreign ships. When his crew insisted on attacking the Quadegh Merchant, a large Armenian ship laden with treasures on the Indian Ocean, Captain Kidd found himself on the wrong side of the British government and he was tried and executed for piracy after returning from a voyage to the Indian Ocean. 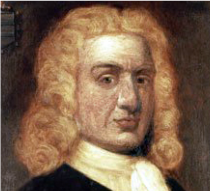 Captain Kidd
​Captain William Kidd (1645 –1701) was a Scotsman who began as a seaman's apprentice on a pirate ship. Then around 1689 while in the Caribbean on a French-English pirate ship he and others mutinied took over the ship and sailed to the British colony of Nevis. With Kidd as her captain the ship was renamed ‘Blessed William’.
At the time the English were at war with the French so Kidd and his ship became part of the islands defence with a small fleet of ships appointed by Christopher Codrington, governor of the island of Nevis, who paid them by granting them the right to ‘Take their pay from the French’ So Kidd and his men attacked a French owned island and looted a fortune of £2,000
His work as a Privateer continued & on the authority of Government officials in New York and Connecticut, Kidd & his crew, sailing off the New England coast, captured an enemy privateer.
Later Kidd was awarded 150 pounds for his success as a privateer in the Caribean. 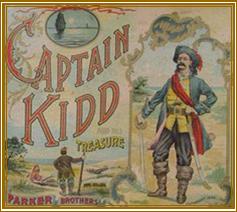 About 12 months after his reward, leaving their ship unattended, Kidd & his crew went ashore and along came another pirate, Robert Culliford, with his own crew who casually went aboard, ‘Pirated’ Kidd’s Pirate ship and sailed off.
On 16 May 1691, Kidd (probably in need of funds) married a young woman, only in her twenties and yet one of the wealthiest women in New York.
Married twice before, she had a huge inheritance from her first husband.
Legends of Captain Kidd’s buried treasure of gold, silver & gems, were partly fuelled by songs in The 1700s ‘Captain Kid's Farewell to the Seas’ &  ‘The Famous Pirate's Lament" Which mentions ‘Two hundred bars of gold’.
Searches have & still are being made for Kidd’s treasure on Oak Island in Nova Scotia; in Suffolk County, Long Island; in New York where Gardiner's Island is located;Charles Island in Milford, Connecticut; the Thimble Islands in  Connecticut; Cockenoe Island in Westport, Connecticut; and on the island of Grand Mannanin the Bay of Fundy
It is a fact that Captain Kidd did bury a cache of treasure in Cherry Tree Field on Gardiner's Island but it found and Governor Bellomont sent it to the courts in England as evidence against Kidd. It is said that around 1699 on Block Island, Kidd asked a woman to hold out her apron into which he threw gold and jewels until it was full, for payment for supplies & her hospitality. After her husband died, this woman moved with her family to northern Connecticut and bought a large parcel of land. For nearly 200 years, a remote area of Grand Mannan Island in the Bay of Fundy has been called "Money Cove" and local legend says Kidd’s treasure is buried there.

Ship's Cannon
In 1983, treasure hunters searched for Captain Kidd's buried treasure off the Vietnamese island of Phu Quok. But authorities imprisoned them for almost a year until they paid a $10,000 fine.
In 2007 it was claimed that the "wreckage of one of Captain Kidd’s pirate ships had been found in less than 4m of water and 21 m off Catalina Island.
The finders spokesperson said "It is remarkable that the wreck has remained undiscovered all these years given its location," and given that the ship has been the subject of so many prior failed searches. ‘ Captain Kidd's Canon’ from the shipwreck was put into The Children's Museum Indianapolis in 2011. ​

PERHAPS SO but it is LEAD NOT SILVER

​Underwater explorers in Madagascar claim to have discovered treasure belonging to the notorious 17th-Century Scottish pirate William Kidd.
A 50kg (7st 9lb) 'silver' bar was brought to shore  on the island of Sainte Marie, from what is thought to be the wreck of the Adventure Galley.

Ingot
UN experts have since said that the ingot is 95% lead
and  the wreckage that the ingot was found in, is not that of a ship that was captained by the pirate William Kidd.

Back to Top of Page
Email​ Rex Woodmore:    art@mail-me.com