​Living On Landfill - Life on a Thai rubbish dump

Overwhelmed by the situation Fred sold up everything he owned and moved back to the dump and now dedicates his life to assisting families improve their lives while continuing their lives and work on the dump.

THE INDIANA JONES OF TRASH

The lady suspected her uncle had hidden the cards in the piano because her aunt saw them as  trash and wanted to throw them out.
​ Thanks to her $25 investment the lady is now set up nicely for her retirement years. In 2019 the rare and well-preserved Babe Ruth 1916 rookie baseball card, (which is considered to be one of the top sports collectibles) hidden for decades inside the old, non-working piano, sold on April 26 2019 for more than $130,000.
​The pre-sale estimate was $60,000-$75,000.

​A Western Australian junk yard called the police when they realised they had a mutilated stolen statue mixed up with brass bits and pieces in their yard.
The complete statue, valued at $44,000 was worth only about $300 as scrap.

A FRAMED FAKE
He literally stumbled on it!

​When the homeless guy tripped over the ornate frame of the painting, a corner of the canvas slipped out enough to reveal the artist’s signature ‘Vincent’. He realised that it was almost certainly a fake 'Vincent Van Gogh' but could still be worth a couple of bucks to someone.
​ So the homeless guy went back to where he got it from & picked up the frame. He had to wait for a week for the auction, but it was well worth the wait. The photo of the artwork in its frame was online. Several bidders recognized the frame as quite valuable. (Antique picture frames are highly valued collectibles in Europe, where they are often displayed, without canvases, as art in their own right). ​
Good News Update: The dealer gave the homeless guy a room above the auction house and employed him to help with future auctions.

RARE VASE  ​AT A YARD SALE

SOME MIGHT SAY IT IS TRASH
THE BEATLES WHITE ALBUM

BUNDLE OF BOOKS​
Contained a treasure!

IMAGES OF THE MYSTERIOUS 15th CENTURY VOYNICH MANUSCRIPT
MYSTERIOUS 15th CENTURY WRITINGS
THE VOYNICH MANUSCRIPT
It is about 100 years since its discovery in Italy by Wilfrid Voynich, an antique book dealer from Poland, after whom it has been named ‘The Voynich Manuscript’ bought it amongst a bundle of second-hand books.
Believed to have been written in the early 1400s, the world's most mysterious medieval manuscript, has 240 pages written in an unknown alphabet & unknown language.
Perhaps even stranger, it has drawings & paintings of unknown plants & astronomical signs.
Inside the book there was a letter, that has been dated to 1666, it is claimed the book had belonged to the Emperor Rudolf II who was a patron of artists and scientists.
It is but was not known of until 1912, when an antique book dealer in Italy, found it in a bundle of books that he had purchased.
Until recent times translation of this, the world's most mysterious medieval manuscript, has eluded cryptographers, mathematicians and linguists for over a century. It has even eluded the team of prominent code breakers who, during WWII, successfully cracked the codes used in enemy messages. Whether it is a complex code or simply a hoax and whether it has any meaningful information, is debated by many.
One suggestion was that it is ancient herbal remedy book, and that the images of women, might be showing them in milk (As was Cleopatra’s habit) or in herbal concoctions.
Other stories & theories include the suggestion that a con artist called Edward Kelley wrote the manuscript in the mid 1500s as a hoax and sold it for big money. But a modern scientific study using carbon dating* at 1400, ruled it out.
Other more ‘out there’ wild suggestions are that it was written by an alien from outer space, in his own alphabet & language & about his life & plants back home.....You decide!
​​

I AM STILL SCRATCHING MY HEAD ABOUT THIS!
Personally I am in favour of it being a hoax.

PICK of the GARBAGE
Gold detected in a gold detector.

A pensioner in need of cash, had a dream of finding gold, but couldn’t afford a metal detector, let alone the cost of fuel to get to the Goldfields. He had to restrict his treasure hunting to fossicking in the piles illegally dumped household junk, in the vacant land opposite his house. He wandered through the grass and trees looking at the mess when he spotted the old wooden handle of what he thought was a miner’s pick, sticking out from under a roll of dirty carpet. He tried dragging it out but the carpet was too heavy, so in a cloud of dust and dog hairs he rolled over the smelly carpet and was delighted to find that it was indeed a miners pick and not only that, he also found a battered old metal detector. 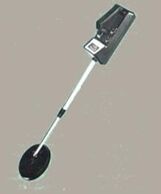 ​ He returned home, to the displeasure of his wife who said “Not more garbage! “ She picked up the detector and gave it a severe shake. It rattled loudly and pieces dropped out onto the floor “See it’s broken! “She said.
“It is now!” said her husband, but as he reached out to pick up the broken bits, he couldn’t believe his eyes the ‘pieces’ lying on the floor were several gold nuggets weighing in total just over an ounce!
It is amazing what can be found if you start looking!
Some of these were found without a metal detector: Pre decimal & Decimal Coins, Cartridge cases, Horseshoe, Iron ball from a ball mill,
Silver & Gold Rings & Jewellery, Lock, Keys, Bits of Copper & Lead Sinkers.

Articles of value (Rings & other Jewellery) that I find while beach & river detecting for coins, are handed over to be held by the Western Australian Police for a period of 2 months.

SCRAP SILVER: http://www.silver-calculator.com/
SCRAP GOLD: http://www.goldcalc.com/
The price can change hourly, so check again just before you sell.
Expect to receive 10-20% less than your calculated value to
offset the costs of refining and profit.