The Padmanabhaswamy Hindu Temple in the background.

MY CONNECTION to  TREASURE in INDIA
Rex Woodmore

JHANSI FORT
My personal interest in India and the treasures of India, come from the fact that my Mother & Father met & married in India and lived in Jhansi Fort where Dad was stationed as a warrant officer with the British army. While they were there Dad was given permission by his superiors to explore a secret tunnel under the fort and search for the fabled treasure of

Unfortunately for my Dad, the tunnel and his treasure hunt, came to a 'dead end' A brick wall that the army would not let him take down.

In London he decided to walk around the streets 'incognito' without his usual  entourage of loyal courtiers. Dressed only in ordinary middle class English casual clothes, he wandered along Bond Street and into the showroom of 'Rolls Royce' the World's best motor cars.
In the reception the snobby manager, in his pin striped suit, looked over the top of his spectacles with disdain at the man that had just wandered in. To him he was just another ‘Indian’. A foreigner that had no right to be in the country, let alone in the home of Rolls Royce .
Ignoring the ‘Indian’s’ request for specifications and prices, the manager beckoned to a staff member and rudely said:
“Show this common Indian man out of the building, will you!"
​Back at his hotel, deeply insulted by the rude treatment he had received, the Maharajah instructed his palace staff to request a meeting with Rolls Royce and arrange for an official Royal tour of their showroom as soon as possible.
He was welcomed by Rolls Royce employees standing on either side of a red carpet that led from the road, through the big double doors and up to the same reception area.
The Maharajah spent a considerable time looking over and discussing all six models in the showroom (Just enough time for the Manager to develop an uneasy feeling that this Indian reminded him of someone) The Maharajah said to him “I will take them all. I have a special purpose in mind for them"
In Europe and America if someone bragged about owning a Rolls Royce, people would laugh and ask if it was the same as the garbage trucks in India and Rolls Royce sales dropped rapidly.

.. MORE of the MAHARAJAH
There is a heap of his cars on a shipwreck!
​Looking for a shipwreck treasure hunt? Here it is! 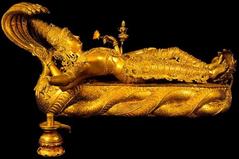 Over 30kg of gold
Research showed the underground temple vaults had been locked for 150 years, but within six days, a panel appointed by the Court, opened five of the six vaults, but at the sixth vault with its iron walls, ‘special’ locks & a door embossed with the image of a snake, the superstitious workers hesitated because it could be protected by the "curse of the cobra." And believed it would spell doom on anyone involved in opening it. “We must not anger the gods” said one local elder. 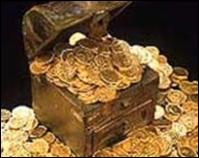 Boxes of coins
In the early 20th century when drought & famine gripped the population, an attempt was made by some of the village authorities went down to break open the underground vaults but when they heard sounds like roaring water, they fled in fear of their lives.
Legend said that the underground vaults lead to the sea, only 5 kilometres away, so perhaps they thought if the doors were opened it would flood the temple & drown them.

Gold rings & jewelery
​But now with the authority of the Supreme Court, the vaults were cleared of their contents consisting of a massive stash of 17th century Venetian ducats, Spanish pieces of eight, gold coins, gold statues & artefacts, some studded with diamonds, sapphires, rubies & emeralds.
All these items, today estimated to be worth $22 Billion, had been donated over a 500 year period by individuals to the temple, with India's royal family as custodians.

Loose gold coins
Today, rather than cashing it in & using the money to help the poor of the region, the Court has ordered a museum be set up to house the treasure.
One can only hope that tourism will assist the region & generate more than $22Billion.

Cobra
People had been saying that opening the last vault would invite the "wrath of the gods"
​Adding to the superstition surrounding the treasure, the man on who’s petition the Court ordered the opening of the treasure vaults and was one of the members of the six-member committee appointed by the Court , developed a fever and died two days later.

THE LOOTED TREASURE OF NADIR SHAH
The greatest accumulation of gold in history!

Who himself died from a gruesome cancer on his face, but not before he hid a huge quantity of the treasure, Sacks of jewels & gold coins, perhaps in the maze of tunnels in the Hindu Kush Mountains. One legend says that he diverted a river near Qandar to flow over the tunnels with their hidden treasure. Many have searched, but all have failed! ​​

THE TREASURE POT
was almost a toilet pot!

Instead of telling the owner of the property who contracted them to do the work, the excited men kept a couple of coins, reburied the rest of them in the pot and told the homeowner that they would be back later to finish the work.
Then they rushed off to the nearest town & showed the sample coins to a pawnbroker who determined them to be quite valuable.
The men excitedly returned to the site and ‘unburied’ the buried treasure. But when they returned to the Pawnbroker to 'cash them in' he told them the coins were worthless fakes.  Then he reported the discovery of ‘Valuable ancient coins” to the police.
Local authorities took over and further digging revealed another 50 gold coins. Most of the coins are from the late 18th and early 19th century when this part of the country was under Hyder Ali, the ruler of the Kingdom of Mysore.​ The origin of the treasure remains a mystery. Its value is unknown, no charges have been laid against the original finders & there appears to be no Archaeological Survey planned for the area.

CLICK IMAGE TO VISIT REX WOODMORE AUSTRALIAN FINE ART
​Don't sell your house to go looking for the treasure that you read about here on Oztreasure, or any other website, for that matter. ​Invest in my art instead!   http://art-sale.weebly.com

BACK TO TOP OF PAGE
Email​ Rex Woodmore: art@mail-me.com