Cave painting
There are early cave paintings of boats called ‘perahus’ and colloquial evidence that long before the rest of the world knew anything of Australia, the coastal aboriginal tribes caught & traded Pearl shell & Turtles ( and sometimes Women), with the Makassan fishermen, who  exchanged  cloth, rice,  gin, tobacco, metal axes and knives.

EARLY CHINESE VISITORS
Perhaps as far back as the 1500s

Trepang (Sea Cucumbers)
There are recent claims that from as early as the 1500s and up to the 1800s  the fishermen from the southwest corner of Sulawesi made seasonal visits to the coast of north Western Australia and the Northern Territory in a fleet of boats called ‘perahus’. There quest was for trepan or trepang, a prized food product in the Chinese markets. This most unappetising looking marine invertebrate is generally known as the sea cucumber or bêche-de-mer in French.
There is said to be a Dutch publication of the last century with an illustration of a ship (similar to that used by the sea going fishermen) being referred to as ‘a Sulawesi pirate vessel in the Persian Gulf’.

Map showing trade route used by makassans to northern Australia and China (from Cawte, 1996).
​Some of the fishing boats are believed to have be wrecked on the Australian Coast, but none has yet (2014) been reported as found. However in July 1916, during a visit by HMAS Encounter to Napier Broome Bay two small bronze cannon were found on an unnamed island. The two guns looked like markers standing upright in the sand about two meters apart and about 25 meters from the shoreline.

Plain Cannon
The guns found on the unnamed Island were originally referred to incorrectly as carronades and the Island was named Carronade Island.
The cannons have since been identified as bronze lantaka (Southeast Asian replicas of European swivel guns).
One is completely plain, 1099 mm long and 33 mm bore.

Ornate Cannon
The other 1094 mm long with a bore of about 46 mm is quite ornate, warn & damaged, but originally with two dolphins and an emblem consisting of a crown with wings.
There are reports that local Aboriginals performed a corroboree around the cannons, depicting white men with skin like turtles, who fired cannons from boats. 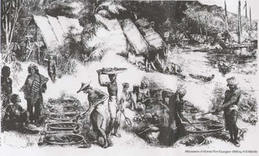 'Macassans at Victoria, Port Essington, 1845, by HS Melville.' Australian National Maritime Museum exhibition, 1997.
‘Skin like turtles’ could have been the armour worn by the Portuguese and Dutch. But the fact the guns are Asian & were found on the Island, with no evidence (so far) of a shipwreck, then it is perhaps more likely the trepang fishermen came on to the Island, to camp and process (dried & smoked) their catch.

The swivel guns, light enough to carry, where their onshore defence. The story in the corroboree is that the tribe fought with them, won the battle and captured the cannons.
Matthew Flinders records that he met armed  Makassans with perahus equipped with small cannons. 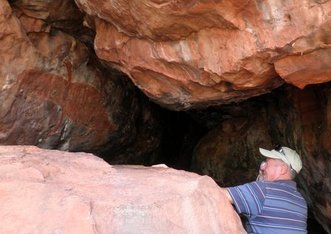 Rex Woodmore looking at Aboriginal Cave paintings away from the tourist tracks in the Northern Territory Australia.
On all Australian Colonial & Pre-colonial Archaeological sites, where the distribution of metal artefacts is anticipated, the inclusion of Metal detection reconnaissance, in conjunction with traditional archaeological survey, should be considered.

Mystery outback find
WHAT IS THIS?
My  imagination says -
A water container dropped from a horse by   Explorer John Forrest's expedition, as they explored in the vicinity  of Fields Find Western Australia?
Probably not, but it is an interesting possibility.
More likely some sort of  water cooler fallen off the back of a Toyota Landcruiser (But where's the fun in thinking that!)

Searching amongst the boulders (an aboriginal site not on the tourist maps) in Northern Territory Australia. Artifacts can be looked at but not removed. 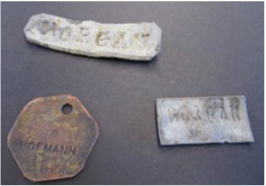 Relics of Western Australian early settlement.Found by Rex Woodmore.
March 2014 UPDATE
The Museum agree that my research & story is quite likely correct. Lead tags from John Morgan around 1830.
Donated to Fremantle Maritime Museum


183 YEAR OLD ARTEFACTS (?)
Two lead labels with 'MORGAN' on them and a metal tag with 'HOFMANN' on one side and '164' on the other.
I was hoping that these may have been associated with early convict days.
Research now shows that they are probably even older. In 1829 The 'first fleet' sailed into the waters of Cockburn Sound and Gage Roads off what would become the port of Fremantle.
The first ship to arrive was the HMS Challenger, captained by Charles Howe Fremantle. On May 2nd 1829 Captain Fremantle finally set foot on the mainland and a proclamation was read claiming the whole west coast of New Holland for the British crown.
The next ship to arrive was the Parmelia (Captain J. H. Luscombe) on the 31st of May, carrying Governor Stirling and the first intrepid settlers including John MORGAN!
John Morgan was a store keeper and he became the land owner of all the area on the Canning River now known as Riverton, where I found the Lead tags.

It is thought that the lead tags are luggage tags (like those used since the 1600’s) and may have been folded around wires or ropes tied around the luggage or deliveries of other stores of John Morgan, in or near 1829 and sat around for over 180 years to be found in the water and mud by Rex Woodmore & his trusty Garrett AT Pro Metal Detector.

EUCLA RUINS OF TELEGRAPH STATION
BURIED BY THE SANDS OF TIME

Eucla Historic Site.Telegraph Station.
Eucla is the easternmost locality in Western Australia, located in the Goldfields-Esperance region of Western Australia.
History: In 1841, Edward John Eyre became the first explorer to visit the area. In 1867, the president of the Marine Board of South Australia

BACK TO TOP OF PAGE
Email​ Rex Woodmore:  oztreasure@mail.com or  art@mail-me.com