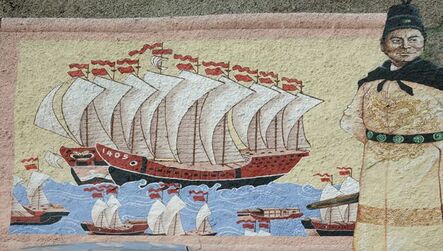 A Chinese Megaship dwarfs a Dutch East Indiaman (Artists Impression)
There are recent claims that from as early as the 1500s and up to the 1800s  the fishermen from the southwest corner of Sulawesi made seasonal visits to the coast of north Western Australia and the Northern Territory. So mit does not take much to stretch one's imagination to the possibility that in the 15th Century one or more Chinese treasure ships visited Australia and could have been wrecked on our rugged uncharted coast. In true treasure hunter style, let's  enjoy that optimistic possibility! 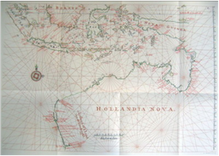 1714 Chart of Australia
The known places the Chinese Treasure Fleet visited on their trade routes
included India, Sri Lanka, Vietnam, Java, East Africa, the Persian Gulf, and Egypt. For several months, near Sumatra, they were attacked by pirates, but the pirates were no match for the mighty Chinese navy & soldiers who captured the pirate leader and took him back to Nanjing.
On the second voyage, which sailed without Cheng Ho, the King of Ceylon (Sri Lanka) greeted the fleet with hostility, so on the third voyage, again under Cheng Ho’s leadership, the Chinese defeated the king's forces and captured the king to take him back to Nanjing.
On one voyage they visited the Persian Gulf at Hormuz and returned, to the delight of the Emperor, with an amazing valuable cargo of pearls and precious stones. They also visited the east coast of Africa, which became a great source of riches to them.

​This film features a glorious reenactment of one of China's "Treasure Fleet" voyages. Director Rex Warner
And the adventures of the movie's Director : Rex Warner
​ Rex Warner Email:  rex@dragonvoyage.com

The span of recorded history is roughly 5,000 years, beginning with Sumerian Cuneiform script, the oldest discovered form of coherent writing from the protoliterate period around the 30th century BC. The term classical antiquity is often used to refer to history in the Old World from the beginning of recorded Greek history in 776 BC (First Olympiad). This roughly coincides with the traditional date of the founding of Rome in 753 BC, the beginning of the history of ancient Rome, and the beginning of the Archaic period in Ancient Greece. Although the ending date of ancient history is disputed, some Western scholars use the fall of the Western Roman Empire in 476 AD (the most used), the closure of the Platonic Academy in 529 AD, the death of the emperor Justinian I in 565 AD, the coming of Islam or the rise of Charlemagne as the end of ancient and Classical European history. In India, ancient history includes the early period of the Middle Kingdoms, and, in China, the time up to the Qin Dynasty. 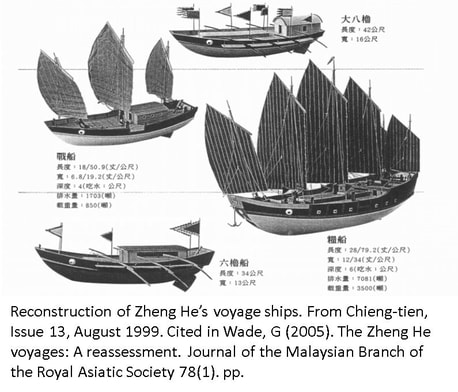 A Nanjing shipyard.
Zheng He is probably China's most famous navigator. Over a 28 year period, he traveled more than 50,000km and visited over 30 countries, including Singapore. Zheng He commanded a huge fleet of massive ships and  explored the Indian Ocean and Western Pacific with seven voyages of the Emperor’s Treasure Fleet, resulting in Chinese control over much of Asia in the 15th century.

Their mighty ships were incredibly sea worthy and with the use of their own invention, the compass, their navigation skills were excellent. They also used  graduated incense sticks which showed the passage of time as they burned down. Communications between ships was with flags and banners, bells & gongs, lanterns and carrier pigeons.

The four flagships of the Treasure Fleet were huge timber vessels, some of the largest ever built in history. 400 feet (122 meters) long and 160 feet (50 meters) wide. There were also 339-foot (103-meter) long ships that carried only horses, water ships that carried fresh water for the crew, troop transporters, supply ships, and warships. The outward bound ships were filled with thousands of tons of Chinese trade goods & around 27,800 Seafarers and Soldiers who returned with great treasures of silver, gold and gems, together with live fish, birds, reptiles and wild animals (which some say even included Kangaroos) for the Emperor’s private zoo.
I must point out, as much as I would like to think that their picture of a kangaroo is evidence of a visit to Australia, there are species of kangaroos to be found in New Guinea also. But then, if they visited New Guinea, why not Australia which is not far from it?

WHERE THERE IS A TREASURE SHIP
THERE MUST BE A TREASURE

Treasure Awaits the Finder
In true treasure hunter optimism, I like to think that is quite possible that during one of the seven voyages of Cheng Ho's treasure fleet,  a detachment of men in one of his ships, visited the far North coast of Australia. If they did then perhaps their vessel was wrecked, leaving treasures awaiting discovery by metal detectors on the seabed, in our sand dunes or on our beaches. For evidence I look to the oral history of Coastal Australian Aboriginals, Reports of Chinese artefacts having been found and stories of an ancient Chinese artwork, depicting a kangaroo  in a setting that may be  the Emperor’s zoo in China. 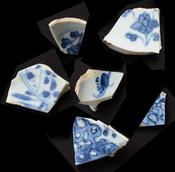 Chinese Porcelain Chards
My artist's vivid imagination sees me digging frantically  for the treasure that my metal detector indicates is buried beneath my feet -Silver & Gold coins, Sapphires, Rubies, Emeralds & Diamonds buried among a mountain of priceless blue & white Chinese porcelain. ...........and why not?
In November 2010, a Chinese vase unearthed in a suburban semi in Pinner sold at auction for £43 million - a new record for a Chinese work of art. Why are Chinese vases so famous and so expensive?
The answer lies in the European obsession with Chinese porcelain that began in the 16th century. In this documentary Lars Tharp, the Antiques Roadshow expert and Chinese ceramics specialist, sets out to explore why Chinese porcelain was so valuable then - and still is now. He goes on a journey to parts of China closed to Western eyes until relatively recently. Lars travels to the mountainside from which virtually every single Chinese export vase, plate and cup began life in the 18th century - a mountain known as Mount Gaolin, from whose name we get the word kaolin, or china clay. He sees how the china clay was fused with another substance, mica, that would turn it into porcelain.
I hope that the late Michael Hatcher didn't beat me to it!