GHOSTS & GALLEONS
​What good Treasure story doesn't have a ghost in it somewhere?

DEMONS - GHOSTS - SPIRITS
WHAT SHOULD WE BELIEVE?

A GHOST IN THE SCHOOL ROOM
Ghosts are not the spirits of dead people!

​My first encounter with a ghost was in the pages of a school book.
​We had to memorize a poem by Alfred Noyes “The Highwayman’’
The poem speaks of the ghost of a 'dead' highwayman.​

DEMONS
The truth in ancient scripture!

Jesus' apostles also dealt with demonic activity (Luke 10:17-20; Acts 16: 16-18). Demons are fallen angels that chose to follow Satan during his rebellion against God.

“And when the disciples saw Him walking on the sea, they were troubled, saying, “It is a ghost!” And they cried out for fear”

‘Galleon’ was originally applied to large ships in the 12th and 13th centuries. These sea going vessels were powered by 60, 64 or 80 oarsmen and used as war ships and ocean exploration. The accounts of the crusades mention galleons or galliots which were probably vessels of this kind. Later the name Galleon was applied to many types of large sailing ships of different origins.

DO YOU BELIEVE IN GHOSTS? BIBLICAL WORLDVIEW 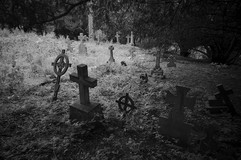 Ghosts. What do you really think about them? If someone pushes us, most will admit a degree of love for scary stories. But what about reports of real ghosts, even by sincere Christians?
​Few Christians seem to know what to think. If we look to the Scriptures, however, we find solid answers, even on this murky subject.

Armed with the knowledge, that people do not remain on earth after death, anyone who has experienced an unexplained ghostly vision and is able to rule out, that they have either imagined or dreamt the vision, they should accept that an encounter with a Demon is a very real possibility.

THE 'HAUNTED' SHIP
THE ALKIMOS

Sailing ship similar to The Gilt Dragon
In Western Australia, stories of ghosts on-board the Alkimos started shortly after she was wrecked in 1963. Around the same time, not far away north on the coast, the Treasure ship Gilt Dragon had been discovered.

Alkimos Coastal Town Development
Today in 2014 ‘Alkimos’ is a bustling suburb of Perth on the coast of Western Australia.
It was named after the ship whose rusting hulk can still be seen in the surf

The Alkimos was a Greek merchant ship which after a series of mishaps was, in 1963, finally wrecked north of the port of Fremantle in Western Australia.
On a journey from Jakarta to Bunbury the Alkimos hit Beagle Rocks south of Geraldton and damaged her propeller. It was thought she was unable to proceed under her own power, and would have to be towed back to Fremantle from where she could then be towed to Hong Kong for permanent repairs.

The stranded and 'Haunted" Alkimos on the beach in Western Australia
But she was able to ‘limp’ into Fremantle. While in port, arson was suspected when a fire caused thousands of dollars damage. Then when eventually the tow to Hong Kong began, the tow line on  the sea going boat ‘The Pacific Star’ broke and the Alkimos drifted back to the coast and was beached.
In February 1964 The Pacific Star made another attempted tow, but authorities arrested the towboat for monies owed to a company in Manila.
Under maritime law The Pacific Star could not continue to tow the Alkimos so she was left at anchor between Eglinton Rocks and the reefs about 4 kilometres south of Yanchep Beach.

Gold Sunset
In 1969, during Alkimos salvage work while welders were cutting out scrap metal, the hulk caught on fire.
When interviewed some of the salvage workers believed the wreck was haunted and said they had heard eerie noises on the ship, footsteps following them around at night and strange cooking smells came from what had been the galley.

Please Note:
Regarding unexplained things on the wreck of the Alkimos.
I do not  doubt that intelligent, perfectly sane individual reliable witnesses, have seen unusual lights & apparitions, heard strange unexplained noises and even smelt cooking smells. Nor do I doubt that these events, in some cases, have had a lasting effect upon their lives. Just as I have no doubt that there are mischievous Spirits (Poltergeists or Demons) and that unexplained flying objects (UFO's) have been seen.
Allan Robinson, who knew many of the locals, told me that the so called 'haunted' hulk of the Alkimos was in fact being used as a secret & illegal offshore processing plant for under size crayfish.
The ‘eerie’ noises & mysterious lights were from these clandestine activities and he believed that the biggest joke was that the apparition of a ghostly man in rubber boots and oilskins walking along the deck was actually the Cray fisherman responsible for the operation.
While sharing a beer with the locals, Newspaper and Television reporters, hungry for a story to rival their colleagues' recent stories about Allan Robinson and his treasure hunting on the Gilt dragon shipwreck,  excitedly lapped up  every ‘tongue in cheek’ flippant comment & story that the good humoured Cray fishermen and their families fed them. Stories that were then reported as fact.

Craypot
If the offshore crayfish processing was true, then some locals must surely have known what was actually going on and who was responsible for these ''paranormal'' activities, but in a typical ‘’Never dob your mates in’’ attitude, they covered the truth with ‘’in-house’’ jokes and created stories and rumours. These rumours quickly grew  and in the minds of many,  cemented the belief that the Alkimos was haunted.

The media reported that local people had heard eerie noises and seen strange lights moving on the wreck and also to have seen the apparition of a ghostly man in rubber boots and oilskins walking along the deck.

Survivors of these shipwrecks had a terrible time running the gauntlet of these headhunters, and many castaways were slaughtered, prompting one stretch of land to become known as Skull Island. Aside from exploring the myths and legends that surrounded the castaways, Cropp delves deep underwater to uncover the remains of many of these ill-fated shipwrecks, as well as examining the various creatures that inhabit the Strait islands.Ben Cropp
Published on Oct 31, 2016

That was until the landowner, Edith Pretty, became convinced that she had seen ghostly figures walking around them.

The crews clothes & international documents were all on board.