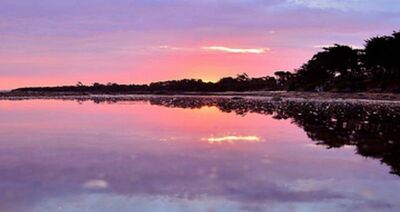 ​INVERLOCH'S TREASURE
Some say this is where to look!

''Somewhere a Hidden Cache of
15,000 Sovereigns ​Awaits a Lucky Finder"
In 1988 The newspaper reporter John Philip  said: could you do with 15,000 minted sovereigns, each worth more than £2 of present-day money?" Sovereigns worth £2.00 each  in 1938,  would today be worth about  $500.00 each! That's $7.5 million!
Somewhere in Gippsland, near Inverloch, that much gold, it is believed, lies hidden, awaiting discovery by some fortunate person. The man who stole the Avoca's gold hid it so cunningly that police and others have sought it off and on for nearly 60 years, with only a few sovereigns to spur their hopes

The Argus Week-end Magazine of January 8 1938
A little more than 50 years ago the Avoca, a steamer of a branch line of the
P& O, set sail from Sydney for Melbourne. She had on board the English mails a chest with about 20,000 newly minted sovereigns, and a ship's carpenter, Martin Wiberg. Because of a contract forbidding P&O liners to carry mails directly between Sydney and England, the mails and chest were transhipped in Melbourne into the Royal Mail steamer 'China'.
And, also in Melbourne, the ship's carpenter picked a quarrel with the second officer and was discharged.
The China came in due course to Colombo and the chest from the Sydney Mint was examined. It was filled with iron bolts and pig lead.

Gold Sovereigns
When the news of the disconcerting discovery reached Melbourne, inquiries were naturally made on the Avoca, and the ship's carpenter, who had been dis-charged for having insulted the second officer, came under suspicion. The robbery could only have been the work of a man skilled with tools, because the chest, which must have been forced open to re-move the gold, appeared, when it was opened in Ceylon, to be untouched. It was thought that Wiberg, the carpenter, could have made his way at night along the keel to the strong room of the ship, entering it from below. He would then have been able to open the chest and close it again when he had removed the gold.

No one ever made any clear suggestion how Wiberg could have taken the gold ashore. Certainly he could not have taken it off the ship in Melbourne. Twenty thousand sovereigns would make an exceedingly heavy parcel.

Possibly he sealed the gold in a number of small wooden boxes and threw the mover board to a confederate when the Avoca was passing the lovely Anderson's Inlet. A few boxes, perhaps a few hundred pounds worth of gold, might have been lost, but the thieves might reasonably have expected to land most of their spoils.

MYSTERY OF HIDDEN TREASURE
Something like that must have been done. The only difficulty is that it suggests the necessity of a confederate, and if Wiberg had a helper he seems to have been entirely neglected by the police in their investigations.
While the China was still on her way to Colombo Wiberg took up land at a delightful place near Inverloch, on the Tarwin, and he was living quietly but apparently prosperously, when the news of the robbery first reached Melbourne. He was sending regular consignments of soap to Melbourne, and when the police became suspicious of Wiberg they examined one of these shipments. Their suspicions were confirmed, for they found a number of sovereigns embedded in the soap. When they investigated further at Inverloch they discovered 200more sovereigns hidden in Wiberg's hut. So they promptly arrested him and took him to Melbourne.
Wiberg stood his trial for robbery and he was sentenced to imprisonment for five years. But only 200 odd sovereigns had been found, and the underwriters thought that they could persuade him to restore the rest if part of his sentence were remitted. Wiberg agreed, but said he could not sufficiently describe the various caches in which he had hid-den the gold. He would have to lead the police to the places himself. So, escorted by a police sergeant and a constable, he went back to Inverloch.
The first of the hiding places, where he said he had concealed about 1,700sovereigns, could be reached only from the river. So early one morning, with the sergeant sitting beside the manacled Wiberg in the stern and the constable at the oars, the three men rowed up the wild reaches of the Tarwin River. Presently Wiberg pointed to the bank and said, "The place is in there, under the roots of that gum." Then, with the eyes of the sergeant and constable fixed on the spot, Wiberg crashed his hand-cuffs on the sergeant's head, and leapt on to the gunwale to upset the boat. Neither policeman could swim, and while they drifted downstream, clinging helplessly to the upturned boat. Wiberg disappeared into the thick bush.
Keeping always away from settlers, Wiberg made his way to Anderson's Inlet, which is one of tile loveliest bays along the coast. Unlike the Kelly gang, which was beginning its activities at the time, the former ship's carpenter never offered violence, and he avoided the few scattered farms. He made his encampment beside Eagle's Nest, and in the caves nearby, which are accessible only at low tide, he must often have hidden. Indeed, it may be in the caves that a great part of his loot was hidden, be-cause it would have been convenient to stow the gold In them when it was taken off the Avoca.
No one had seen him for some months, when a party of police surprised him in his camp at Eagle's Nest, near Cape Paterson. This time he served part of his sentence, but, with ingenuity equal to that of his first escape, he broke gaol and was never recaptured.
There are stories that he became an Innkeeper in Europe, but nothing definite is known. One story was told years later by a Victorian squatter who had been on a journey oversea. He stayed at a small Provencal inn while travel-ling in France, and was surprised to find that his host had a brother In Victoria who knew Inverloch, and who had told him about the gold robbery. The brother said that the police were fools; they should have made a thorough search, not in the hut but in the ground near it.
The people in the Provencal village called the innkeeper Andre Duvain, but they thought him a mysterious character. He had lived in the village only five years, and he never spoke of his earlier life. They did not know any-thing about his brother.
The Victorian police made a thorough search of the hut. They recovered more than £1,000 of coined gold hidden in scooped-out pieces of timber, in the seat of a chair and buried under the hearth in a great cake of beeswax. But when they had recovered all that they could there were still more than 15,000 sovereigns missing. And the gold is still, waiting for a finder.
Until a few years ago Wiberg's hut was still standing on Mr Wyeth's  property, Pine Lodge, Inverloch. Then Mr Wyeth pulled it down to clear a fairway for a golf course. When the hut was removed every corner and cranny, every stone in the chimney, and every piece of timber was carefully examined without result.
But the people of Inverloch still believe that Martin Wiberg's gold is hidden somewhere there. Perhaps the old innkeeper in Provence, whose mysterious brother had lived at Inverloch, knew more about the hiding place than he told the squatter. 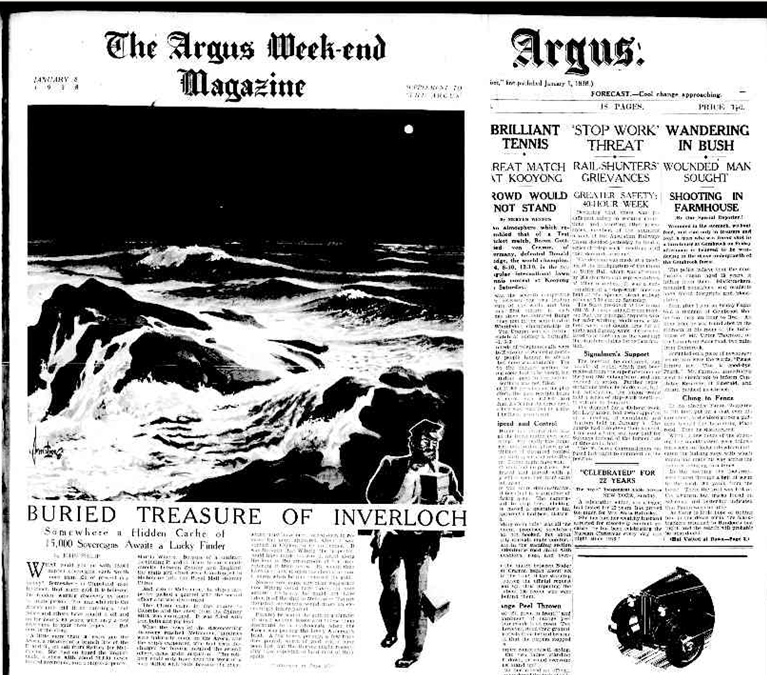 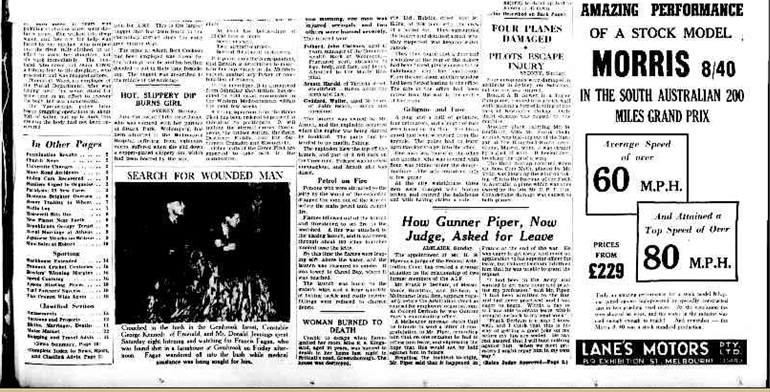 "A GOLD SEEKER'S ODYSSEY"
TO THE EDITOR Of THE ARGUS 1938

Sir, Your reviewer of this book has sufficiently warned readers against accepting many of the author's facts. It is wrong and misleading to paint the atmosphere of the West Australian goldfields as lawless. With full know-ledge of the locality and period, I can say that before the railways "spoilt" the place, life and property were safer than in any other community In Australia. Not one of my friends can recall seeing a man carrying firearms; he'd have been laughed at. Prospectors sometimes carried rifles for shooting game, and on one occasion an Afghan was shot on being found washing his feet in the only waterhole (soak) available to travellers. That was, I believe, the solitary crime in four years.
Mr Menzies's pitched battle with the blacks, when 12 were killed and four wounded, is utter nonsense. I doubt If one black was ever shot on the gold-fields area. It Is hard to believe that as many as 12 aborigines were ever seen in one day or belonged to one tribe there. A shooting of blacks (it is assumed) did occur in 1911 beyond Wiluna, when a party left that town to "inquire into" the spearing of three drovers who had set out from Wyndham along Canning's stock route-the first mob to use it.
No Informed person can accept the fact that Mr Menzies ever shot his way out of anything more serious than a paper bag. The only "tight corners were connected with want of water previous to 1896.
Apollo Bay. Yours, G R YOUNG