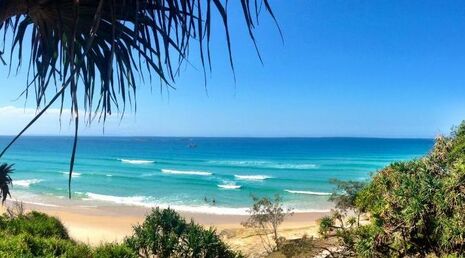 THE MYSTERY of STRADBROKE ​Mid 1800's

​In mid 1800’s European settlers began to hear the story of a mysterious oak, shipwreck hidden by tall reeds in the swamp. 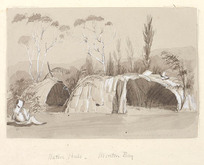 Aboriginal Shelter
The healthy Aboriginal population usually lived a true hunter gatherer existence, collecting various types of berries and seeds, gathering shellfish and fishing for many varieties of sea food. They also hunted for kangaroos, wallabies, echidnas, snakes and the lizards that were abundant on the island, but then, when the European arrived, it was not uncommon for Stradbroke Island Aborigines to use Spanish gold and silver coins to buy sugar & flour from the settlers.
One interesting report is that of a woman of Aboriginal descent who claimed that her grandfather had often shared with the family, the ‘secret’ of how they were descended from survivors of a ship that was stranded on the island many generations ago.

COINS ON THE ISLAND DOUBLOONS & PIECES OF EIGHT

Over the years, occasionally after a bush fire, the wreck would be sighted, but when heavy rains came and the thick reeds grew back, it was grown over and lost again.

THE SURVIVORS AND THE TREASURE

​​In the 1860’s the Hon. E.J. Stevens, a Queensland member of Parliament who had a cattle grazing lease over an area of the island, was taken by an Aboriginal female employee to see the shipwreck in the 18 Mile Swamp.
Also there is the story of Mr Graham, the Moreton Bay light keeper, visiting the wreck. He was told by his Aboriginal wife, that her people knew of a shipwreck in the 18 Mile Swamp and that there was a legend that some of them (Perhaps the Elders?) knew from past on information through the generations, of the location of a hidden cache of gold coins and wreck artefacts.  Graham visited the wreck and it is said that he retrieved an anchor. Then at the south end of the Island in Swan Bay area, he recovered an ancient wood stocked anchor, that he kept at his home near Nerang.

THE WRECK IN THE SWAMP SIGHTINGS

Artists impression Spanish Galleon shipwreck Stradbroke Island, Tasmania.
Another recorded sighting was a few years later when a shipwright, Matthew Heeb, while looking for timber, came across the wreck and described it as a vessel with a “high poop and forecastle’’. He retrieved about 50 kilos of copper fittings from the shipwreck and showed his valuable finds to his friend the Queensland Colonial Secretary Hon J.G. Appel. This led to a serious, wreck expedition.       In about 1894 (after a fire had burnt through the swamp) J.G.Appel, Matthew Heeb and his secretary, local historian Isabel Hannah, travelled by boat to the ‘Stockyards’ near Slipping Sands (where the Echidnas (spiny ant eaters) thrive), then hiked overland to the top of a hill, where they could see clearly in the burned out and blackened swamp below, the remains of a wreck, with the appearance of an ancient Spanish Galleon. An exciting moment that no doubt buoyed their enthusiasm, but when they found that the rains had already come in and the water was too deep to proceed, their hopes were dashed. When eventually, with more suitable equipment, they returned to the site, they were again disappointed. The wreck had (as was its habit) once again disappeared among the rapid new growth of the tall thick reeds.
Sadly it appears that the fires have burned the ships timbers down to at least the ground level. If the peat in the swamp burned long & hot enough, perhaps all the timbers below the surface have gone.

Kids at the beach
Although the Aboriginals and many others have, over many years, visited the site and since 1989 many expeditions into the swamp have found artefacts, that may be from the wreck, in the last decade or so, expeditions by treasure hunters, using modern remote sensing technology, magnetometers, metal detectors and satellite imagery, have all failed to relocate the wreck site.

WHO WERE THE SURVIVORS PIRATES or MUTINEERS?

1500 Spanish Shipping Routes
If the wreck is a Spanish galleon, then one would expect its proposed journey and loss to be recorded in Spanish Maritime archives. Perhaps research of missing Spanish Galleons would find records of the unexplained loss of a galleon, that could fit the idea that it was headed elsewhere, when the crew mutinied or it was intercepted by pirates, then while fleeing from the powerful Spanish navy, they fled into uncharted waters.
If the crew were mutineers who had done away with their Captain & his mate, then as ordinary seamen they may not have had the necessary navigational skills to keep them in charted waters so they just sailed on into the great unknown until, after many days, weeks or months at sea they stumbled upon an island and called in for water and timber and  grounded on a sand bank, where the vessel remains to this day.
Fortunately the Islanders where hospitable, they had plenty of food to share and shared their meat & fish for the treat of sugar, honey & flour from the galleon’s stores.

​The men on the 'galleon', on finding the islanders hospitable and friendly, may have preferred to stay with them, rather than sail on to the unknown.
The galleon, stripped of it's contents, may have remained moored until storms dragged the anchors and beached the vessel where it stayed until the topography was changed.
Over hundreds of years, the Pirates/Mutineers, where slowly integrated into the genetic makeup of the tribe. But the Spanish Galleon, now devoid of its treasure and general cargo, remained stuck in the sand, of what may have begun as the sand bank of an inlet (evidenced by coastal type shell middens around the present site) but in the winds and rain storms of time, it has been re sculptured and altered to a swamp, surrounded by ever moving sand hills (The fact that the water is fresh water instead of sea water, is no surprise when one remembers, the general survival rule that a shallow dig behind the second row of coastal sand dunes usually provides fresh, often brackish water).
Perhaps there was always the tribal fear that the survivors would be found by pursuing authorities, so even after the original shipwreck survivors had passed away, the family genealogy was always spoken of in hushed tones. Until the arrival in the 1860’s of the European settlers, there was no use for the hidden treasured artefacts and gold and silver coins.
There may have been many gold and silver coins changing hands, with both parties keeping quiet about their trading arrangements. The original islanders not saying how they came about their modern wealth and the settlers not wanting others to cut in on their lucrative trade or worse the Government of the day claiming it all.

THE CANNON WHAT HAPPENED TO THEM?

Cannon
Spanish galleons were huge, multi-decked sailing ships, utilized during the 16th to 18th centuries, by European countries for both commercial & military pursuits. They were designed and built to survive long sea journeys and storms and were wind powered by sails on 3 to 5 masts made of pine. The deck and hull was crafted in hard wood, the keel was oak and the rest of the ship was constructed of different types of timber including oak.

For protection against pirates or for use in military battles, a galleon was usually armed with cannon known as the demi-culverin.
In 1588 during a battle of the Spanish Armada, both the English and Spanish warships were heavily armed with canon.

IS THE SHIP IN THE SWAMP  A SPANISH GALLEON?

Spanish Gold Doubloon
The finding of Spanish coins is not proof the galleon was Spanish.
Spanish coinage was used not only by the Spanish but by the British, the Dutch and many others.
Perhaps the mysterious wooden ship  in the swamp is British or Portuguese?

The 18 Mile Swamp is the largest of its kind in the world and is directly threatened by pollution from the nearby dredge sand mining at the ‘Enterprise’ mine.

The area was named Naree Budjong Djara National Park   by indigenous people on the island who are engaged in its joint management with the Queensland State government and is home to many endangered rare species.
On 27th March 2011,  Premier Anna Bligh announced parts of the 18 Mile Swamp wetland would be included as part of a staged national park  using the rhetoric that 20% of North Stradbroke Island has now been protected.  This internationally recognised RAMSAR listed wetland is a tract of land which  could not be directly mined.
However the 18 Mile Swamp wetland remains threatened as the western sand escarpments (pictured right) and eastern shore (where the wetland is recharged  with water)  remain locked up within sandmining leases. Under Queensland State government policy the buffer distance between areas to be destroyed by open cut sand mining and RAMSAR declared wetland will be 20 meters at best.  This Government policy threatens the 18 Mile Swamp wetland and its habitat for endangered species with pollution. 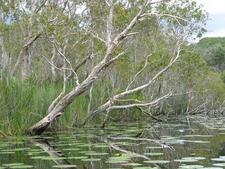 It has been determined that this back barrier swamp formed during a less than 1 metre fall in the sea level since. This allowed a new beach to form eastwards and thus prevented the westward movement of sea water. The swamp, which receives its water from the island dunes, contains Freshwater Creek which is barely discernible in much of the Northern section. It is surprisingly deep where it enters the sea water conditions of the mangrove and palm swamp adjacent to the shallow sea of Swan Bay to the south. In the last sixty years there has been a noticeable increase in tea-tree and weeds (groundsel, etc) in lieu of reeds in the southern and mid sections of the swamp. This may be caused by an increase in salt-water ingress from Swan Bay with a slight increase in sea level or the extraction of fresh water for the mainland. The peat in the fresh water area is about 10 metres deep and consists of 4 metres of fibrous peat overlying 6 metres of an older gel-like material of embryonic coal. Hydrogen sulphide gas is evident in the anaerobic decomposition of the peat. This gas is also more noticeable where sea-water enters in the southern area.
​Don't sell your house to go looking for the treasure that you read about here on Oztreasure, or any other website, for that matter. Invest in my art instead!  http://art-sale.weebly.com

RETURN TO TOP OF PAGE