Eleven vessels are listed as having been lost on Lord Howe Island, but to the treasure hunter the shipwreck of most interest is that of a whaling ship, the George and almost $3 million of treasure.

​ she sailed with a crew of twenty from Hobart heading for sperm whale hunting in the waters between Australia and New Zealand.
​The crew expected their tour of duty to last up to 18 months and that they would all share in ten thousand pounds of profit.
The cargo sold for the handsome price of five thousand British gold sovereigns. Then with the gold in her strongbox they headed out for another hunt. On the way they called in to Lord Howe Island for wood and fresh water. Some of the crew went ashore to fill the water casks and the George coasted along the southeast side of Lord Howe Island. The first mate was understandably jumpy because,
It was early in the morning, the sea was calm the Captain’s son was given a turn on the wheel a light breeze brought in a thick fog the rolled down  from Lord Howe’s Mount Lidgbird & Mount Gower. The breeze dropped and the strong tidal currents dragged the ship onto a submerged rock, which is now known as George rock and she was badly holed. The ship was sinking fast, so in order to save what he could, including their lives, Captain Rattenbury had no option but to instruct the crew to run her aground (now called George’s Bay) where the ship remained stranded & eventually broke up & wrecked.
​ The sad news of the wreck was shared with them. They set up camp and waited (ever fearful of imagined cannibals) to be rescued by another ship seeking fresh water. After three weeks the Mary Elizabeth, a New South Wales Government brig and the Nelson a civilian whaling barque called in and rescued them. 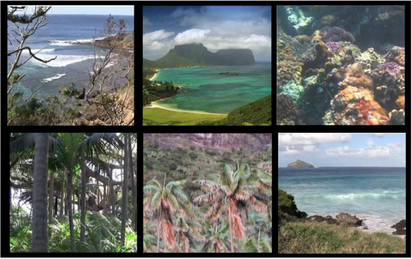 THE TREASURE ISLAND IN DREAMS & MOVIES

Approximately seven hundred kilometres north-east of Sydney, on the southern-most coral reef of the western Pacific, you will find one of the world’s most beautiful islands. Constitutionally, the island is part of New South Wales.  Named after a British Admiral, Lord Howe, the crescent shaped island is eleven kilometres long and a maximum of one and half kilometres wide. A six kilometres long lagoon teeming with fish, enclosed on the western side by a reef offers shelter to small vessels. At the south-east end of the island, often looking mysterious behind a veil of cloud cover, two high peaks - ​

It was only a couple of days before the brig Mary Elizabeth called in for water, and the Captain Rattenbury and four of his crew were taken aboard. The incident was reported in the Sydney Gazette of the 26th February 1831 and they said: “When the Mary Elizabeth proceeds again for her destination, it is supposed she will call on her return from Norfolk island, for the remainder of the crew that now remain there”.

Strongbox for ships treasure
The existence of the valuable treasure was not mentioned and was left behind together with the rest of the crew who were taken aboard the whaler Nelson. It is not known if they took the treasure with them or left it behind, but it appears that Captain Rattenby expected it was left there because in the same year 1831, only a couple of months later, he returned to the island and found the topography had been altered by storms, to such an extent, that he could not find the treasure. 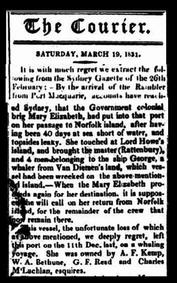 Hobart Town Courier 1831
It is with much regret we extract the following from the Sydney Gazette of the 26th February:- By the arrival of the Rambler from Port Macquarie, accounts have reached Sydney, that the Government colonial Brig Mary Elizabeth, had put into that port on her passage to Norfolk island, after having been 40 days at sea short of water, and topsides leaky. She touched at Lord Howes’s Island, and brought the master (Rattenbury), and 4 men belonging to the ship George, a whaler from Van Diemen’s land, which vessel had been wrecked on the above mentioned island.-When the Mary Elizabeth proceeds again for her destination, it is supposed she will call on her return from Norfolk island, for the remainder of the crew that now remain there 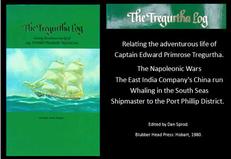 I would like to think that the newspaper got it wrong with their suggestion:
“When the Mary Elizabeth proceeds again for her destination, it is supposed she will call on her return from Norfolk island, for the remainder of the crew that now remain there”.

Personally I find the shipwreck and its buried treasure to be one of the more believable buried treasure stories. Perhaps both rescue ships arrived at the same time, filled up with water supplies and when they set sail, took with them the Captain & his senior crew members on the Government brig Mary Elizabeth and the ordinary seamen on the whaling barque Nelson. If this is the case then the treasure, which represented the wages of all who had sailed on the George, would not have been mentioned to the rescuers who, with their act of rescuing the crew of a shipwreck could have had salvage rights to the treasure. It is quite believable that it was safely hidden and left behind for later recovery. 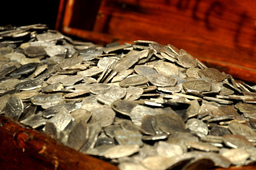 TREASURE CHEST FULL OF GOLD COINS!
The treasure should have been safe and easy to find, but they had not banked on devastating topography altering storms. Perhaps the storm damage was a result of a tsunami caused by the distant volcanic eruptions of Mt Bromo in East Java or elsewhere.
If the Island was hit by a tsunami, then all landmarks used on a treasure map would be lost and the strong box with its treasure could have been ripped up by the force of the wave and re deposited, perhaps with many meters of sand now covering it, anywhere on the island or it could have been washed into the lagoon or the deep water of the sea.