QUEST for THE MAHOGANY SHIP
The sun is setting on the mystery. 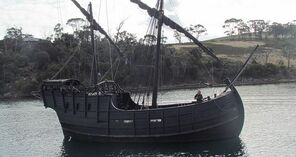 Tantalizingly close to proving the existence & location of the famous 'Mahogany' ship, Rob Simpson's research and his great video, impressed me so much that I just had to offer him his own page here on Oztreasure.
One story of the Mahogony Ship story was included in The Book of the Bush by George Dunderdale, in 1898:
“ January, 1836, Captain Smith, who was in charge of the whaling station at Port Fairy, went with two men, named Wilson and Gibbs, in a whale boat to the islands near Warrnambool, to look for seal. They… found the mouth of the river Hopkins. In trying to land there, their boat capsized in the surf... [They] succeeded in reaching the shore naked, and they travelled back along the coast to Port Fairy..

MYSTERY WRECK From Ancient China ? (I wish!)
ACTIVITY IN RECENT YEARS
1992 the State Government of Victoria offered a $250,000 reward to anyone who could locate the Mahogany Shipwreck. The offer was withdrawn in 1993.
1999 Des Williams discovered wood fragments buried in the sand dunes in the area. But they were White Oak, as used in the US & Europe ship building but not a Mahogany coloured timber. Perhaps from yet another wreck.
2004 An extensive search was done with drills to a depth of 10 metres.
2011 To try to locate the vessel Rob Simpson used old accounts, such as the Alexander Rollo expedition in the19th century.He also used Google Earth to identify what  seems to be a clear correlation between the coordinates and the outline of a ship beneath the sand. The area is Armstrong Bay east of Gorman's Road (formerly Lane) and west of Levy's Point near Dennington.
2011 A replica caravel inspired by the Mahogany Ship, launched at Port Fairy

The “Mahogany Ship” is one of Australia’s most intriguing and enduring shipwreck mysteries.

In 1836, two survivors of a capsized whaling boat reported sighting a large shipwreck in sand dunes between Warrnambool and Port Fairy. Shipwrecks were not unusual in the area at the time, but the reported construction of dark timber, possibly mahogany, and the ship’s hull design were vastly different from the vessels which sailed the local waters in the early 19th century.

More than 30 other accounts of the wreck were recorded until the 1880s.
Many people at the time, and since, believe the wreck to be a Dutch or Portuguese exploration ship from the 1500s.
Many others believe it is nothing more than an interesting local legend, as there have been no reported sightings since the 1880s and, in fact, no solid evidence of the wreck at all.

With his brilliant research & detective work, I think Rob Simpson has hit the nail on the head. Let's hope the nail is handmade & in Mahogany!

QUEST FOR THE MAHOGANY SHIP by Rob Simpson

I have been going to Warrnambool all my life and have often taken my family there for holidays.
It has been possible to use the existing literature about the Mahogany Ship mystery to find the exact position of large buried shipwreck inland near Warrnambool. The concept becomes even more convincing when the technique of aerial archaeology is added. However there is a huge covering of sand at the site. So far it has not been possible to prove the theory with tangible evidence as I am not an archaeologist and these days you are not allowed to dig. Ground penetrating radar doesn't work well at the site because of the salt in the sand.
My video Quest for the Mahogany Ship unfolds the literary and aerial evidence for the site. I was helped with the movie in all sorts of ways by my family and friends, so have many people to thank for their contributions.
I would like to see the remains of the shipwreck investigated by archaeologists.

Rob Simpson
Rob Simpson is the Author of a book that teaches natural typing without repetitive strain.