WHEN I AM NOT TREASURE HUNTING I PRODUCE PAINTINGS OF TREES, BIRDS & ANIMALS
WAS IT A FAIR FIGHT?
FIGHTING for THE LEGAL RIGHT
THE GILT DRAGON TREASURE

IN MY OPINION
Allan Robinson had the legal rights to the salvage of the 1656 Gilt Dragon Treasure!
Rex Woodmore art@mail-me.com 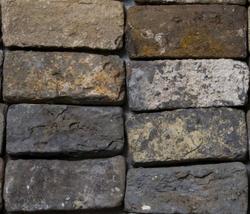 VOC BALLAST BRICKS
Before the legislation was changed Allan Robinson, working within the existing laws, was already salvaging material from the wreck of the Gilt Dragon, so when they changed the laws to stop him [Like moving the goal posts to win the game] he had a moral & legal right to challenge their right to make it an offence for him to continue removing treasure & artefacts from the wreck of the Gilt Dragon.
1973 The court agreed that Allan Robinson had the legal right to a batch of confiscated coins from the Gilt Dragon and orders the CIB to return them to him. In 1973 worth $50.000 (In WA he could have bought two suburban houses for that much) In 2019, 2,500 Gilt Dragon coins are worth well over $1 million. 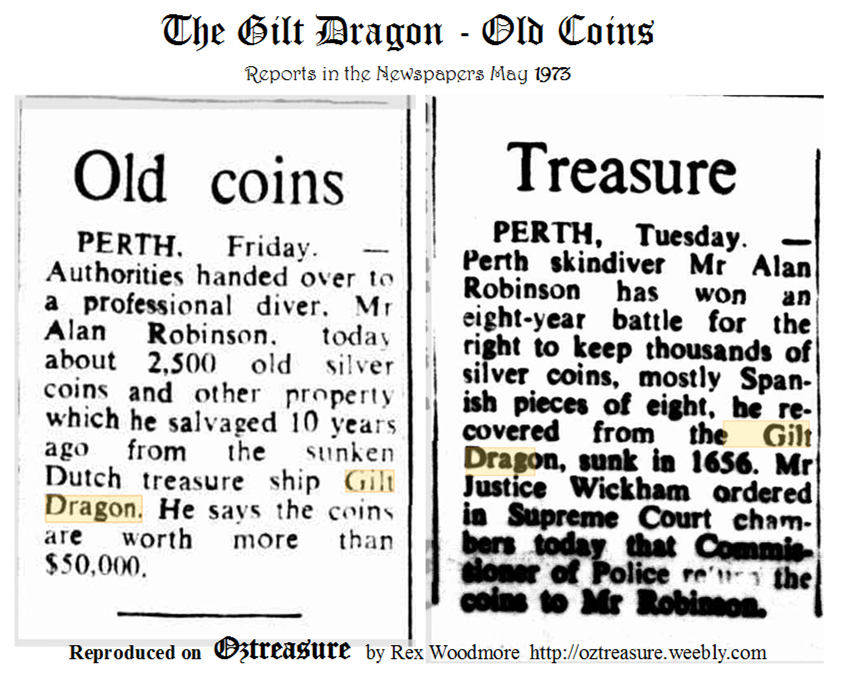 Allan Robinson is given his coins back. Proving he had the legal right to them. 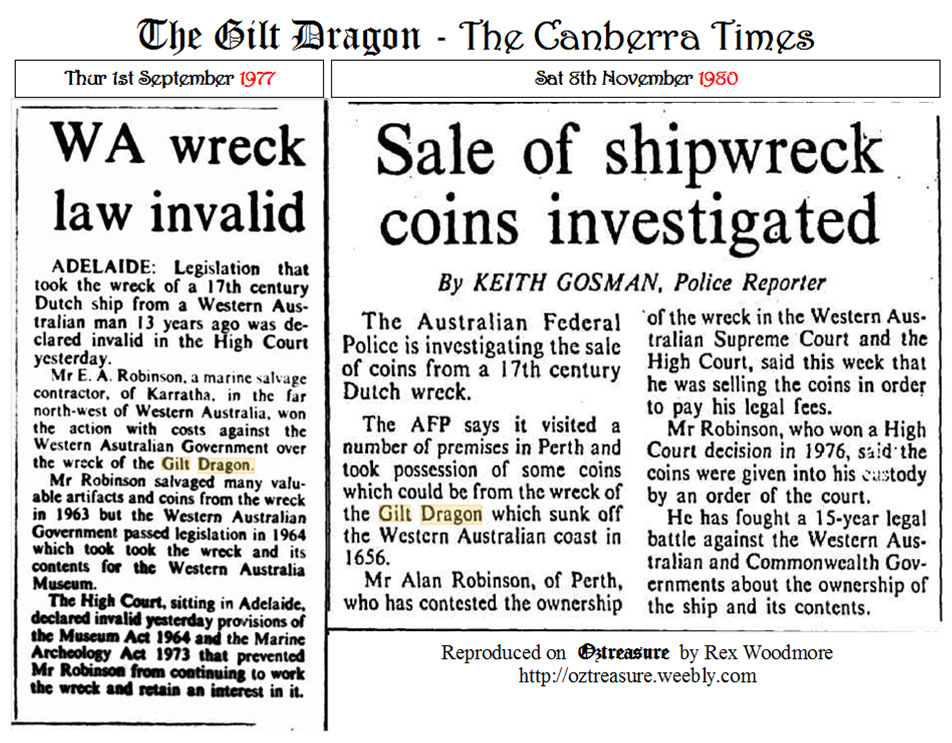 When loads of ballast bricks identified as from the Gilt Dragon were found in a local government tip, they tried to pin it on Allan Robinson! If one is tempted to think Allan Robinson might have dumped the bricks after breaking open the conglomeration & removing coins from them, then I point out that the rubbish tip was a long way from Allan’s home in Grand Promenade Morley & I know for a fact that Allan saw value in each complete brick, so would not have throw them out. In fact Allan Robinson even valued the limestone rubble that came off the bricks and he had his driveway to his garage made of it! (I saw it and drove my Mini car on it!)

As for the left over broken bits & pieces that formed quite a pile in Allan Robinson's yard, he contracted two men to make a driveway to his shed with it! Allan told me that early one morning he showed the contractors what he wanted & jokingly said to them
​ “If you look hard enough, you might find a silver coin or two that I missed in it” Then he left them to it and drove off.

AT ALLAN ROBINSON'S HOUSE
Coins by the bucket load!

There were wooden workbenches on either side and on each bench was a plastic bucket full of coins soaking in dilute hydrochloric acid, to dissolve the rust and limestone coating on them. We were amazed at the lack of security. Anyone could have walked in from the footpath and helped themselves to perhaps 200 or more solid silver coins (pieces of eight, four & two) worth (even in those days) thousands of dollars. To put it into context, my car cost me 753 pounds or $1506. I probably could have bought at least 3 minis with the contents of those buckets). No one was home & we drove off leaving Allan’s pile of coins just as we had found them. When I told Allan about our visit and the tempting stash of coins, he just grinned and said "There are plenty more where they came from”
NOTE: in 2019 those coins would be worth $100.000

FROM THE AUSTRALIAN DICTIONARY OF BIOGRAPHY Robinson, Ellis Alfred 'Alan' or 'Allan') (1927–1983) by G. C. Bolton The Australian Dictionary of Biography is Australia's pre-eminent dictionary of national biography. In it you will find concise, informative and fascinating descriptions of the lives of significant and representative persons in Australian history.
​​The ADB is produced by the National Centre of Biography at the Australian National University. 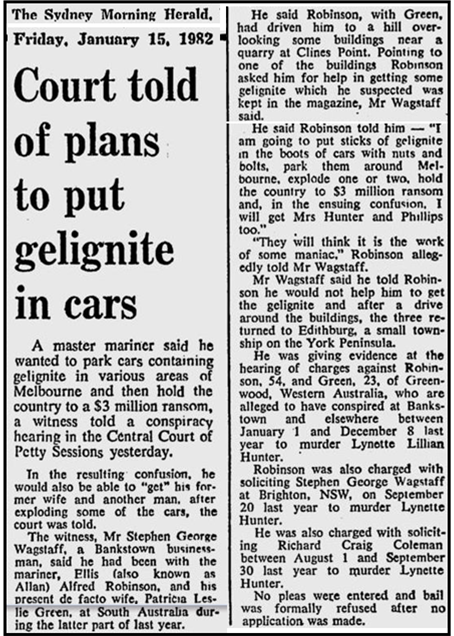 Gilt Dragon Treasure Hunter, Allan Robinson (54) and his de facto wife Patricia Green (23) where charged with conspiracy to murder, the result in the court case was that Patricia Green was found not guilty.

But death robbed Allan Robinson of his last day in court, when he too was expected to be found innocent.

At 7.30 am, when Patricia Green was acquitted, the jury was informed Allan Robinson had been found hanged in his cell, less than an hour before, at 6.25am.

As I say on the first page of this website: Consider the information presented herein to be as reliable (or as unreliable) as stories, legends & myths  told around a flickering campfire.

NOTE: Some years after this event, a Barrister (not directly associated with the case) told me that he and his colleagues believed that after Patricia Green’s acquittal, Allan Robinson, had he been alive to face court for his last appearance, would also have been pronounced by the jurors as ‘’Not guilty”. Rex Woodmore 2014

I often wonder who ''THEY" They get blamed for allsorts of things!)

The conspiracy theorists went into overdrive, with comments like:

They were out to get him!”… “Don’t mess with the authorities”… ’’He wouldn't back down with his claim of salvage rights over the wreck of the Gilt Dragon”… “People in high places have stolen silver coins from the wreck’’… ”They tried to get him with lots of other charges and every time he was acquitted”… “The only thing they ever got him on was a parking fine’’…’’It was a vendetta’’ … ‘They charged him with having stolen gelignite – he showed them permits and receipts’’… ‘’In Perth, he usually didn't get parking tickets, because he would slip the parking attendants the occasional shipwreck coin”… ‘’Who got the gold?’’ … “The archaeologists have not reported any gold?’’… ‘’He was bumped off to shut him up’’… ‘’He knew too much’’… ‘’A senior politician has stolen Gilt Dragon cannon in his backyard’’ …”He was ‘stitched up’ by the big boys”… “Suicide? A strange way for Allan Robinson to celebrate the imminent declaration of his innocence”…“Murder? The only way out to silence Allan Robinson forever?”…’’He found a secret base in the desert with rusting, tanks & valuable military equipment’’…. ‘’He found another shipwreck that the Government don’t want us to know about’’…''THey charged him with stealing a ballast brick''..."Then they  dumped hundreds of Gilt Dragon ballast brinks in a local Shire rubbish tip’’….....................
“He said, she said - who can you believe?’’ 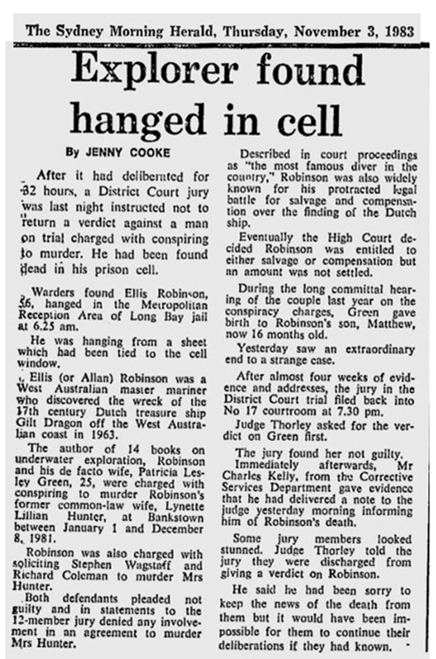 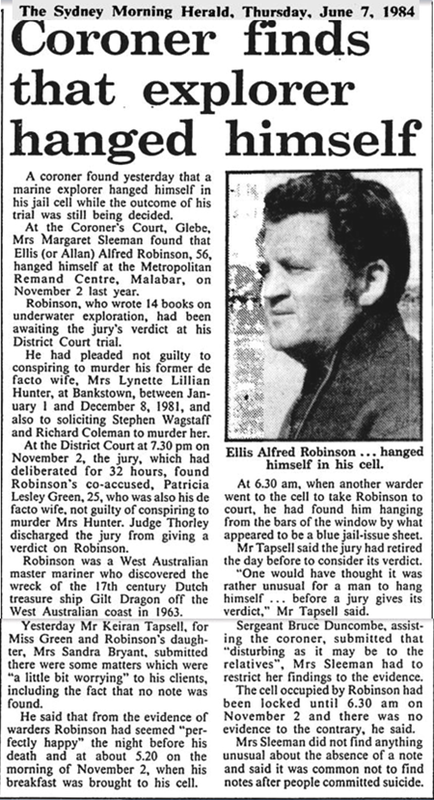 YOU MIGHT ASK WHAT I THINK
ABOUT ALLAN ROBINSON

I knew Allan very well. He was, for me, a likeable rogue. He was one of my diving instructors in the  Underwater Explorers Club (U.E.C.WA)
He was the man who enthralled me with stories of his adventures and the adventures of others. He would often quote from research he had done on the adventures of the infamous Bully Hayes.
I  have my ideas and I have a sense of loyalty to Allan Robinson.
I do not indorse the comments made by the many conspiracy theorists.

Allan Robinson was not only partly responsible for my diver training, but he was like a protective Uncle to me. I have been in the water when he used explosives (not on the Gilt Dragon) & was quite safe. He was by my side when a shark ‘sniffed’’ at my bleeding legs and he saved my life when I almost drowned on the wreck of the Gilt Dragon.

I knew and liked the Robinson family (Not the Swiss family Robinson but the Morley Drive, Dianella, Western Australia, family Robinson) I dined with him and his lovely first wife (who was Grace by name and grace by nature). I remember two daughters & one was about 12 years old (?) and a tough little boy of about 6 (?) the image of his Dad, with prickly crew cut hair.
I nicknamed him ‘Butch’ and from then on Allan often referred to him by that name. Sadly, years later, I heard that ‘Butch’ as a young man, was killed in a Motorbike accident.

A TWO YEAR GAP IN THE ARMY
I LOST TRACK OF SHIPWRECK BUSINESS.

A toast to the Sgt Major
I was called up into the Army,During the war in Vietnam. Apart from a couple of letters from Allan to me in Adelaide, we lost contact and for two years I knew little of what was going on in regards to shipwrecks & fights over treasure in Western Australia or anywhere else for that matter.


I did not go overseas.The only action I saw, was as a cook in the Sergeant’s Mess, when I burnt the Regimental Sergeant Major's toast!


It was not until I was discharged from the army and returned to WA, that I met Allan at an Underwater Explorers display in the Perth town hall.
There was quite a crowd gathered around us and I was made to feel quite important, when in a loud voice Allan Robinson   offered me a job with his ‘Underwater Salvage Team’.

Piece of Eight
As tempted as I was to accept, a small quiet voice encouraged me to say ‘’No!’’
He simply grinned, reached into a display case and presented a Gilt Dragon coin as a welcome  home present
(Later the coin was stolen during a burglary on my home).

Beardman Jug
I often wonder what might have been, had I accepted Allan Robinson's offer of a job as an Underwater Salvage diver and I also remember clearly how, one day in the Robinson’s home,  Allan’s wife Grace, while holding a stoneware jug from the Gilt Dragon, quietly confided in me:‘’Allan would give his life for the wreck”


...AND ROBINSON DID GIVE HIS LIFE FOR THE WRECK!

TREASURE IS NOT FOR THE FINDER
Book by Allan Robinson 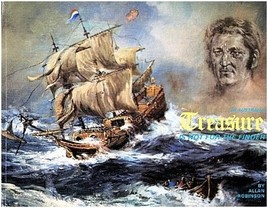 The book by the late Allan Robinson.
I bumped into Allan in Rockeby Road Subiaco, he was just about to get into his car.I hadn't seen him for years. We shook hands & he seemed very happy with life. He told me it was his Birthday. I wished him happy birthday and jokingly apologised for not having a present.


He laughed & said "No, but I have something for you"
He opened the boot of his car to reveal a bundle of  books.

He cut the string on the bundle,autographed one & handed me a copy of his new book (hot off the press)  In Australia 'Treasure is not for the Finder'

That was the last time I saw the infamous Ellis Alfred Robinson (Alias Allan or Alan) I was saddened to hear how he ended his adventurous life (Hanging in an Australian prison cell). It is even sadder to learn that this man, who was to me, like an Uncle & was always so generous and kind, had a dark side that haunted him to the end.

﻿ALLAN ROBINSON SAID:
"In Western Australia Treasure is not for the finder"﻿

BACK TO THE  TOP
Email​ Rex Woodmore:  oztreasure@mail.com or  art@mail-me.com