TREASURE HUNTER
Rex Woodmore
I don't claim to be the world' greatest treasure hunter but there have been a few pinnacles in my searching for things and ​I have found treasure!

The Pinnacles, Cervantes, Western Australia.
#MetalDetecting, #MineralProspecting, #ShipwreckDiving, #TreasureHunting,
After five decades of employment in many industries including mining, offshore gas rig labouring, Horticulture at many levels and environmental management, I now pursue the even more interesting aspects of life, like art and treasure hunting which includes, Metal detecting, Mineral Prospecting & Shipwreck treasure hunting on land and in the sea.

ENJOYING THE SEARCH FOR TREASURE
No Experience Needed to Find It!

THE SEARCH FOR ATOCHA
​Sometimes life really does mirror the fictional tales that we enjoy.

​SPANISH TREASURE
Sam diving for sunken treasure on the Atocha.

''The search takes on a meaning of its own
​and anything else is a bonus!"

On Florida waters
On July 20, 1985 Mel Fisher and his company ‘Salvors Incorporated’ discovered the 1622 wreck of the Spanish galleon Nuestra Señora de Atocha and recovered treasure worth around $450 million. The treasure included precious Colombian emeralds, gold and silver artefacts, a quantity of gold coins, 1000 silver ingots and 114,000 Spanish silver "pieces of eight". In all there was 40 tons of gold and silver.

Amazing as that may seem, more amazing is the fact that this was only about half of the treasure that was lost with the Atocha. They did not find the ships the stern section, containing a heap more treasure including 8 bronze cannons and 300 silver bars.

Fisher's company also found several other shipwrecks in Florida waters, including, another 1622 wreck, the Spanish galleon Santa Margarita (Atocha's sister ship) and the wreck of a slave ship the Henrietta Marie.

In California 20% of historic shipwreck artefacts is claimed by the state.

California has a much more just system than that which treasure hunters work under in Western Australia, where one could receive only a couple of thousand dollars from the state, for a treasure worth millions. The finder could also be stopped from ever diving on his find again, allowing government museum staff exclusive access to the wreck site and its treasures.

Gold & silver.Photo by Lynette Woodmore
Way back in about 1963 the first detector I used on the beach (without success) was a huge heavy thing, a borrowed WW2 mine sweeper.
In the 1980’s, in the Yalgoo goldfields I got my vehicle horribly bogged and after hours of digging it out I had to use a White’s Metal Detector to find the jack that had been swallowed up in the mud (that was all I found on that trip).
Sometime later on my first serious attempt at  gold panning and metal detecting, I found the equivalent of two days wages in tiny gold nuggets, in about 3 hours in the rain, with a plastic bag over the detector.

MY CHOICE FOR TREASURE HUNTING
Garrett AT Pro Metal Detector

I use a Garrett AT Pro metal detector on land and underwater
​ (with garret waterproof headphones) to search the Swan & Canning Rivers, Metro beaches, parks and anywhere that I have the legal right, on the coast & outback of Western Australia & beyond. 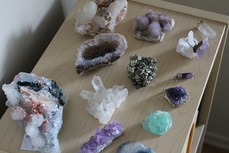 Mineral Crystals & Geodes
I have a reasonable knowledge of Geology & experience in prospecting.
Back in the 1980’s I completed a part time, 12 month formal study course in Geology & Mineral Prospecting and went on to be the founder & proprietor of Tracmin Mineral Exploration.