​​SUBMIT YOUR UFO SIGHTING TO MUFON

Welcome to the world's largest and most detailed database of reported UFO sightings. Each case file brings us one step closer to uncovering the truth...
MUFON receives between 500 and 1000 UFO reports a month from all across the globe. These include but are not limited to reports of:
#StructuredCraft #OrbsOfLight #Entities #Abductions #AlienEncounters
#CattleMutilations #CropCircles. http://www.mufon.com/report-a-ufo.html

​ABOVE RIGHT: First ever interview with missing Westall school UFO incident 1966 Melbourne Australia. Derek Weise contacted UFO Research Queensland in September 2018 stating that he was a witness to the UFO incident at the Westall school, and would like to tell his personal story of events. Derek was the missing witness that ran into class yelling "Mr Greenwood there are silver objects in the sky...." Derek was first student to see the UFOs overhead and eventually landed near the school, and much of his testimony contains never before heard details of this classic event. We at UFORQ commend Derek for his brave decision to share his remarkable story with us, so that we can now forward it onto you.
​Interview by Sheryl Gottschall.
Camera/film production by Barry Taylor for UFO Research Queensland (Australia). Thank you Derek. UFO Research Queensland Published on Oct 27, 2018

VIDEO STORIES of UFO SIGHTINGS
​ I believe in demonic deception.
I  DO NOT BELIEVE IN ALIENS FROM OUTER SPACE

ALIEN INTRUSION - A MUST SEE MOVIE!
My wife and I saw a special screening of this movie.
​Believe me it is well worth seeing! March 2018

Nikola Tesla's Antigravity UFO:
​What happened to his greatest Invention?

The Real History of UFOs
They Want You To Think Aliens

Said to be the true story regarding how real UFOs were developed secretly, right under our noses. Many have became convinced these UFOs are in fact spacecraft flown by aliens.
​Governments and the media scoffed at the idea of alien transport -- but others claim they know better.

LENTICULAR REENTRY VEHICLE.
Not a UFO!

When one examines this phenomenon, one of the most disturbing but powerful affirmations of the spiritual realm, Christianity and the Bible becomes clearer. This documentary seeks to solve one of the most haunting and persistent mysteries of our time by addressing  UFO sightings in every country, things seen on radar, what happened at Roswell, alien abductions, government cover-ups, and even a “new” religion. The truth will surprise you!

WYCLIFFE WELL AUSTRALIA
The UFO centre of Australia.
​It is true there are signs of UFOs & Aliens 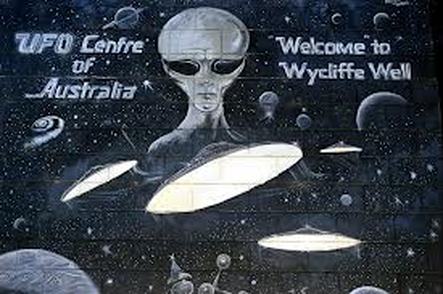 The writing is on the wall - a sign of Aliens at Wycliffe Well!

AT THE CENTER OF THE UFO CENTER
​We camped overnight at the center of it!

HUNDREDS OF UNIDENTIFIED OBJECTS
We had them buzzing around us all night!

I don't believe in little green men!
But I have seen things in the sky that to me are ''Unidentified Flying Objects" and in the bush at Wycliffe Well there are hundreds of them!

Actually I have seen lights & things.
I think space junk is the answer to most of them.....
​but perhaps not all of them!..One was a meteorite, I am sure. 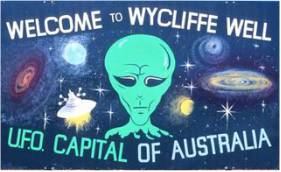 A sign of Alien invasion at Wycliffe Well!
For over 50 years there have been countless reports of sightings of strange things in the sky at Wycliffe Well. The area has such a reputation for the unexplained that even the Royal Australian Air Force has conducted investigations.

The owner of the caravan park has capitalised on those sightings and turned Wycliffe Well into the UFO capital of Australia.

Who wouldn't look up at the beautiful sky over Wycliffe Well? 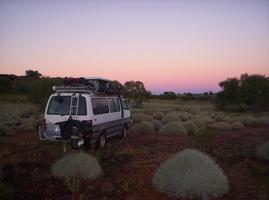 The night sky above Wycliffe Well. Beautiful but no UFO sightings for us.
The isolated bush near Wycliffe Well is beautiful country, especially at sunset.Even without a UFO sighting the sky was wonderful .
We regret not staying there longer, but it turned cold & began to rain, so the next morning we continued on to an even more isolated area in the Harts Range,where we camped and  found it to be far more eerie than Wycliffe Well.

UFOs and the COMING DECEPTION

Charles W. Missler graduated from the U.S. Naval Academy before working for several years in the aerospace and computer industries. He joined the Ford Motor Company in 1963. Missler joined Western Digital as chairman and chief executive in June 1977, and became the largest shareholder of Western Digital. In a 1984 interview, Western Digital's then chairman, Roger Johnson described the company under Missler as having a good reputation for technology with a terrible reputation for execution, and seriously undercapitalized.

In 1983 Missler became the chairman and chief executive of Helionetics Inc., another technology company. He left Heliotronics in 1984 "to pursue other opportunities in the high-technology field." In August 1985 Helionetics sued former chairman Missler, alleging a conflict of interest. Missler and other Helionetics executives had decided not to purchase a small defense electronics maker, which company was subsequently purchased by an investment corporation in which Missler held a controlling interest. The suit was settled when Missler's firm agreed to pay Helionetics $1.6 million.

In 1989 he headed up the Phoenix Group International, a former Colorado real estate company that entered the high-tech industry to sell personal computers to Russian schools. Phoenix filed for bankruptcy protection in 1990 when the deal did not develop as anticipated.

After teaching for many years at Calvary Chapel Costa Mesa, Missler moved to Coeur d'Alene in 1992 and founded Koinonia House. Through this organization, Missler distributes a monthly newsletter, Bible study tapes, and a radio show, and speaks at conferences. He has also been involved in efforts to use computers to decipher what he considers coded messages contained in the Bible.

Missler is a prominent speaker on the subject of bible prophecy. Missler has had numerous programs aired on the Christian television station GOD TV, namely the DVD versions of his biblical studies "Learn the Bible in 24 Hours", "The Book of Revelation", "The Book of Genesis", and "The Book of Daniel"

AN ALIEN IN THIS WORLD
Aliens do exist!

The definition of Alien: Belonging to a foreign land ‘an alien culture’​  Biblically, the Christian's eternal home is Heaven,  so technically as a believer I am an Alien in this world!
​​I am in the world, but not of the  world. Rex Woodmore

TRUTH IS STRANGER THAN FICTION
I have the truth! I believe in the deception of demons!
DO YOU WANT TO DISCOVER THE TRUTH?

DOUBT ME? Come back when you have been observing things on earth for 7 decades, and we can talk about it!  :-) Rex Woodmore 2018
But I do not believe it was some alien being spying on them. ​​
In a transcript of Gemini 7 mission, the astronauts mention a "bogey" which ufologists have claimed was a reference to a UFO.
It is now said that the astronauts' comments about a "bogey"
​was referring to booster-associated debris, and not a reference to some sort of Unidentified Flying Object (UFO)

MY BOAB  TREE PAINTINGS
​Some people say "They are out of this world!" 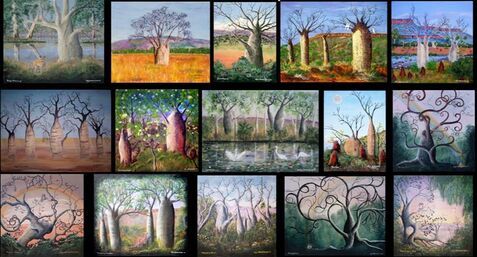